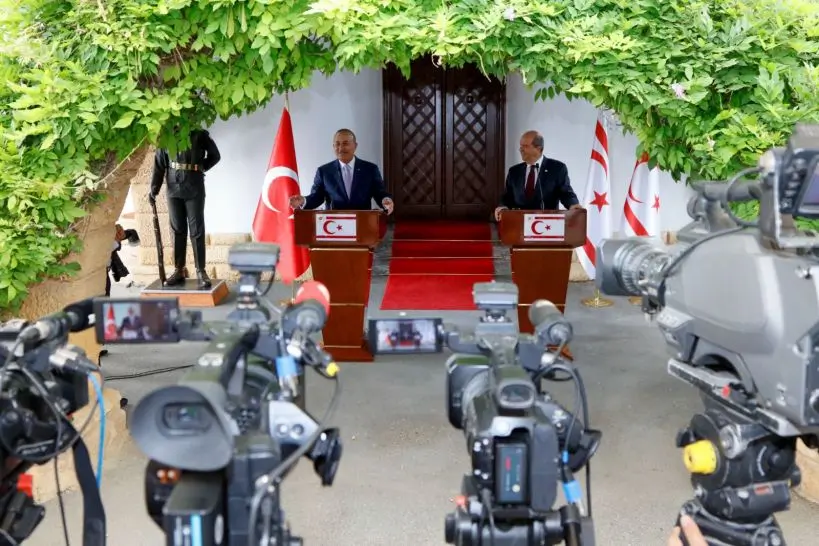 Turkish Foreign Minister Mevlüt Çavuşoğlu has promised to make it easier for Turkish nationals living in the northern part of Cyprus to get Turkish Cypriot citizenship, further deepening already grave concerns about the demographic change in the society.

During a gathering in Lapta/Lapethos earlier this week, Çavuşoğlu, in response to a Turkish national, who asked for help in getting a Turkish Cypriot citizenship, said: (getting a citizenship) “will no longer be a problem. There are laws here, but these can easily be changed through ordinances.”

Çavuşoğlu was accompanied by Ziya Öztürkler, who is responsible for the internal affairs dossier including the granting of citizenships in the current Turkish Cypriot coalition, who listened in compliance. Çavuşoğlu’s blunt promise on behalf of Turkish Cypriot authorities led to Republican Turkish Party CTP deputy Doğuş Derya to liken him to a “colony chief.”

The promise of easier citizenship deepened concerns among the Turkish Cypriot community, who already feel like a minority in their own country in the face of a growing Turkish population.

Senior researcher Mete Hatay of PRIO Cyprus Centre, who has done extensive research on the population and population politics in Cyprus, estimates the current Turkish Cypriot citizen population to be around 230,000. Seventy thousand of these are of Turkish origin, according to Hatay. The de facto population, on the other hand, including the workers on work permits and their families as well as students, is close to 500,000.

Under the current law in the northern part of Cyprus, anyone, who has been living there legally for at least five years – in other words – has five consecutive working permits, is entitled to receive citizenship as long as they don’t have a criminal record.

Since the law only sets the minimum number of years, different political parties have had different citizenship policies when in power. CTP, in 2015 for example, published an ordinance to increase the number of years required for becoming entitled to citizenship to 13. The National Unity Party UBP reduced this to ten years through a new ordinance.

“From what I understand, Çavuşoğlu is referring to the law, which stipulates a minimum of five years, and says the current rules can change with an ordinance,” says CTP deputy Asım Akansoy, who was responsible for the internal affairs dossier between 2015 and 2016. “So what Ankara wants is for the ordinance requiring ten years to change and for everyone, who has been living in the northern part of Cyprus legally for five years, to immediately be granted citizenship.”

Akansoy stated that Ankara had approached him with the same request during his post.

It seems that Ankara will be piling on the pressure regarding this issue, since the controversial “Economic and Financial Cooperation Protocol,” signed between the northern part of Cyprus and Ankara back in April also has a provision on the easing of the granting of Turkish Cypriot citizenship to Turkish nationals.

“With the aim of enhancing mutual cooperation, legislative arrangements will be made to ease the conditions of naturalisation,” the provision stipulates.

Researcher Hatay draws attention to the dangers of politicizing the citizenship issue like this.

“Can’t Çavuşoğlu, who made a public promise about citizenships, see that he is instigating the demographic fracture on this island?” he asked on his social media page. “Or does he not care?”

“This policy of further easing the conditions for citizenship turns all people of Turkish origin into Trojan horses,” in the eyes of the Turkish Cypriot community Hatay tells the Sunday Mail. “They are seen as a group that can be manipulated in the elections and that can dictate the outcome.”

Already, some 40 per cent of the total number of voters in the northern part of Cyprus are of Turkish origin, according to Hatay.

“This is not a percentage that can be underestimated,” he says. “Although they don’t vote for a single party as a block, they are a very important factor especially in the elections for the Turkish Cypriot leader, where even one vote can be decisive.”

According to Hatay, the pressure to ease the granting of Turkish Cypriot citizenship to Turkish nationals, is targeted towards the elections in Turkey more than anything else.

“The aim is to affect the elections in Turkey more than it is to manipulate the elections in Cyprus,” Hatay says. “This move is targeted towards garnering votes for the Justice and Development Party AKP. But of course we can say that it hits two birds with one stone.”

AKP has historically done worse among the people of Turkish origin on the island than it did in the mainland in every election since 2014, when the Turkish diaspora gained the right to vote.

“This is why they are trying to attract votes with populist acts such as the easing of citizenship conditions,” says Hatay.

Getting a Turkish Cypriot citizenship gives the Turkish nationals living in the northern part of Cyprus the right to elect and be elected, as well as make daily life easier for them. Once they have Turkish Cypriot citizenship, they don’t have to renew their work permit every year, undergo health checks, and exit the country and come back every time they want to change jobs. With a citizenship, they also gain the right to make investments and buy property. In fact, there have been cases of Turkish nationals being deported after their work permits expired.

There are no clear numbers of how many citizenships are currently being granted. However, from fragmented statements from different officials in different media, it can be calculated that in the last four years until September 2021 some 13,000 people were granted citizenships. This makes on average 14 citizenships granted in one day.

The issue of citizenship is very sensitive since it is also directly related with who will or will not be entitled to become citizens of a possible future federal Cyprus. During the Cyprus negotiations in 2016, Turkish officials including President Recep Tayyip Erdogan had put pressure on the Turkish Cypriot ruling coalition of the time to naturalise 26,500 Turkish nationals, who had gained the right to receive Turkish Cypriot citizenship by law. Turkish Cypriot leader of the time, Mustafa Akinci had convinced Erdoğan to put this demand on hold.

In its 2021 Report on Turkey, the European Parliament calls on Turkey to refrain from action altering the demographic balance in Cyprus.