Turkish Cypriots are going to polls once again on Sunday for the second round of the elections for a Turkish Cypriot leader. The vote is widely seen as a choice between submission to Ankara, and freedom and dignity.

Two candidates will be competing in the second round: The current Turkish Cypriot leader Mustafa Akinci and right-wing National Unity Party UBP’s Ersin Tatar. In the first round of elections on 11 October, Tatar led the polls with 32,34 per cent of the votes. Akinci got 29,80 per cent.

“On the one hand we have submission to Ankara… and on the other hand we have dignified relations with Turkey,” wrote Turkish Cypriot Sami Ozuslu in the daily Yeniduzen. “The votes for Akinci will show what this community prefers.” 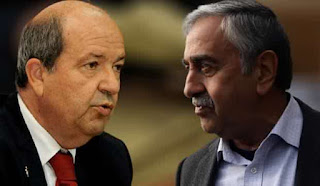 The elections are marred by serious accusations of intervention by Ankara in favour of Tatar. In a declaration that came shortly before the first round, Akinci stated that he had received death threats from a Turkish official. “By an official of the Turkish government, I was told that not becoming a candidate would be better for myself and my family,” Akinci said.

In an attempt to support the right wing candidate, Turkish President Recep Tayyip Erdogan, days before the election, opened a part of the sealed-off city of Varosha for visits. There were numerous reports of Turkish officials visiting villages and telling voters not to vote for Akinci. In an effort to remove Akinci, Ankara in early August, invited Turkish Cypriot right-wing party leaders to encourage them to agree on a joint candidate to compete against the Turkish Cypriot leader. It has also been revealed that the Turkish ambassador in the northern part of Cyprus invited a number of deputies to his residence to garner support for Tatar. Tatar also paid two unexpected visits to Ankara in the week before elections where he was promised cash injections to the Turkish Cypriot economy. There have also been reports of a spate of phone calls and visits to leaders of local communities, club managers, a and businessmen offering them generous support in exchange for votes supporting Tatar.

“You do not have the authority to say ‘This will be you president’” Akinci said after the first round. “Intervention in the elections to this extent is unacceptable. This is extreme. I believe that my community will say ‘I have the right to live with dignity’… These elections have turned into a choice about my community’s fate, about the existence of my community on this land, and about what kind of a future it wants.”

The European United Left/Nordic Green Left group at the European Parliament released a statement last week calling on Turkey to cease its intervention in the Turkish Cypriot leadership elections.

“In the last few months, we have been witnessing unprecedented interference by Turkey on Turkish-Cypriot affairs, and this rose dramatically during the recent elections for the Turkish-Cypriot leader,” said the group. “Turkey has been openly challenging the candidacy of the current leader Mustafa Akinci, who believes in a federal state and peaceful co-existence of the two communities. Turkish authorities used and are still using all possible means to make sure that he loses these critical elections.”

Akinci has a good chance of winning the elections as the Republican Turkish Party CTP, whose candidate Tufan Erhurman came third in the first round last Sunday, decided to back the incumbent Turkish Cypriot leader in the second round. Erhurman had won 21,71 percent of the votes and his party’s support is likely to tip the balance for Akinci.

Many Turkish Cypriots – already increasingly restless in the face of what they describe as the ever-growing oppression by the Justice and Development Party AKP  – see Turkey’s intervention not only against Akinci but also their own dignity.

“This election is closely connected to the issue of dignity,” said assistant professor Dr Umut Bozkurt from the Eastern Mediterranean university. “The elections on Sunday are no longer elections but a referendum on the future of the island and the intervention of Turkey in the northern part of Cyprus.”

Mustafa Akinci and Ankara have been at odds mainly over the solution of the Cyprus problem after negotiations failed in July 2017. Their relationship deteriorated further earlier this year when Akinci, in response to a question by the British newspaper The Guardian on the possibility of Turkey’s annexation of the North, said: “It’s a horrible scenario.” The Turkish Cypriot leader was relentlessly criticised and, some would say threatened, by Turkish officials.

AKP and Erdogan see Akinci’s presence as the Turkish Cypriot leader as a direct insult, according to senior researcher Mete Hatay from the PRIO Cyprus Centre. “Turkey is intervening in these elections with everything it has; through oppression, threats, promises because AKP and Erdogan have turned this into a matter of honour. Akinci’s victory will stain their honour.”

A brief look at Akinci’s past reveals that he has consistently stood up to Turkey, even when the political cost was high.

When he was in the ruling coalition in 2000, Akinci got into a big row with the commander of the Turkish security forces in the north over transferring the control of Turkish Cypriot police from the Turkish military to civilian authority. During a ceremony, Commander Brigadier Ali Nihat Ozeyranli harshly criticised this decision, prompting Akinci to stand up, say the commander’s statements were not in line with democratic principles, and leave. Akinci later organised a press conference, where he famously stated: “The commander has exceeded his authority.” His coalition collapsed as a result.

Later, in 2003, during a conference in Majorca, Spain, Akinci publicly called upon the then-Turkish Prime Minister Erdogan, who was also present, to stop transferring population to Cyprus. Many political analysts believe that if it weren’t for these incidents, Akinci could have played a more central role in Turkish Cypriot politics during the Annan Plan period leading up to the referendum in 2004.

With the current rule in Turkey, where opponents are penalised, many analysts believe that Akinci’s victory would act as a strong message from little Cyprus to an autocratic giant.

“Akinci is not only competing against Ersin Tatar, but also against Erdogan, who intervened in the elections directly, openly and without feeling the need to do so in secrecy,” wrote seasoned Turkish journalist Zeynel Lule in his column in T24.com. “Will Turkish Cypriots vote to protect their own identity and freedom, or will they choose dependence and submission?”