Why I support Niyazi Kizilyurek

It’s argued that journalists must be impartial.

As a Cypriot journalist, I never shied away from taking sides and making this clear.

Because in this country, where we have been obliged to division, filled with with fear, hatred and nationalism, restrained in ethnic identities and made to believe that half an island is bigger than a whole island,
Being impartial means being on the side of the status-quo.

As someone who always struggled for peace and unification in Cyprus, I am supporting Niyazi Kizilyurek in the European Parliament elections.

Not because he is a Turkish Cypriot.
But because of the values he represents and the vision he has. 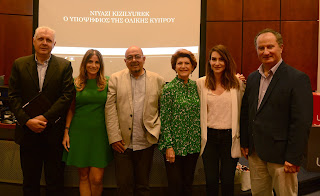 I am supporting Niyazi Kizilyurek because I believe that every vote cast to him, is a vote cast to peace against enmity, to federation against division, to future against the past, and to unity against separation.

I am supporting Niyazi Kizilyurek because I believe that every vote cast to him, is a vote cast at ONE Cyprus, a complete Cyprus with all its ethnic identities, religions, and languages.

We have been taught that Turkish Cypriots and Greek Cypriots cannot coexist, cannot have a common struggle, cannot dream of a common future.

We have been made to believe that our past is divided and our futures are separate.

We have been forced to struggle against each other, rather than together.

Those who tried to say and do the opposite were silenced, intimidated, rejected.

NK has shown that everything they wanted us to believe until now is a huge lie.

He has shown for the first time in the painful history of Cyprus, that Turkish Cypriots and Greek Cypriots of different political backgrounds can unite under a common vision and support the same candidate regardless of ethnicity.

He has shown that in this island full of ghosts and prejudices, we can be together, we can dream the same dream, we can fight the same fight.

In this island where we have been uprooted, divided and scattered all over, Niyazi Kizilyurek has shown that the struggle is not between Turkish Cypriots and Greek Cypriots but between those, who want to keep this island divided and those who dream of a united Cyprus.

And you know what?

Niyazi Kizilyurek has won these elections even if he loses.

Because he has shown us our capacity to win together.