Akinci: A lone fighter who won't give up

ONLY two years after the devastation and division of 1974, when nobody could dare dream of it, the 28-year-old Mustafa Akinci imagined a single, united Nicosia.

In the 14 years he served as the Turkish Cypriot mayor of the divided capital from 1976 to 1990, he pioneered cooperation with his Greek Cypriot counterpart Lellos Demetriades to develop a common Nicosia Master Plan and common infrastructure works reuniting the city. 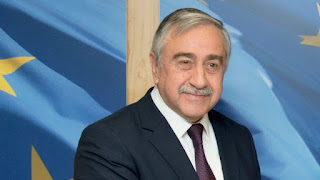 The future Turkish Cypriot leader was a solid social democrat and a strong believer that Cyprus should be united.

“He had to fight for what he did in Nicosia as a mayor,” says Akinci’s long-time friend and confidant, journalist Hasan Kahvecioglu. “The war had just ended and the majority was psychologically not ready for cooperation with Greek Cypriots. Society excluded him. He was branded a traitor. The then-Turkish Cypriot leader Denktash ostracised him and cut the allowance to the municipality. But he faced up to all and reunited Nicosia in terms of infrastructure and heritage.”

Akinci is stubborn and knows how it is to fight alone. Today, Akinci, who was widely seen as the best chance for the solution of the Cyprus problem, finds himself fighting alone once again.

During the recent visit by Turkish Foreign Minister Mevlut Cavusoglu to the island, the longstanding disagreement between Akinci and Ankara over the nature of a settlement could not have been made clearer.

“Some people in north Cyprus keep on saying, ‘According to my ideology federation is the best’ and dictate what should happen,” said Cavusoglu, referring to Akinci. “The Cyprus issue is too grand to be sacrificed to someone’s political ideologies or political ambitions.”

“Of course nobody can single-handedly dictate the solution model for Cyprus,” Akinci snapped back. “But this rule is valid for everyone.”

The only reason Akinci ran in the 2015 elections was to solve the Cyprus problem through a federal solution, says Kahvecioglu.

Akinci showed Ankara he would not yield to bullying when, only a day after he was elected, Turkish President Recep Tayyip Erdogan attacked him for calling for “brotherly relations” with Turkey rather than one of a “mother” and her “baby”. Erdogan warned Akinci to watch what he said and not forget that Ankara financed the Turkish Cypriots.

“I am behind everything I have said,” responded Akinci on live Turkish TV. “Not only I know what I say, I say it with my conscience, my heart and my mind.”

“He is very honest and direct,” says Kahvecioglu. “And he expects people around him to be the same.”

Throughout the negotiations, Akinci had to tread the very thin line between being flexible, compromising and courageous to take the necessary steps to reach an agreement with his Greek Cypriots counterpart, but at the same time, convincing Turkey and keeping it on board. Contrary to popular belief, the communication between Akinci and Ankara was not a one-way channel where Ankara dictated and Akinci delivered.

“There were harsh, hours-long bargains behind closed doors with President Erdogan especially in the territory and guarantees topics,” explains Kahvecioglu. “He even threatened a couple of times to leave the negotiation table if Ankara would stick to maximalist positions.”

In doing this, Akinci fully believed that Greek Cypriot leader Nicos Anastasiades would stand by him and that they would walk together until the end, according to Kahvecioglu. “He believed that they both knew where they were going and wanted to go there.”

On more than one occasion during the negotiations, Akinci took steps despite Ankara’s reservations, even objections.

“The first fight with Ankara was at Mont Pelerin [November 2016] when Akinci said he was ready to increase the percentage of area that would be returned to the future Greek Cypriot constituent state,” said Kahvecioglu. “Anastasiades didn’t reciprocate and asked for a recess. Then in Geneva, when he gave a map before securing a rotating presidency, just before Greece disrupted the conference.”

These were irreversible tactical mistakes in the negotiations according to Ankara. When such compromises did not lead to a successful result, Akinci was left exposed.

“Akinci is being reminded at every opportunity that he showed his cards too soon, that Anastasiades didn’t reciprocate,” says Kahvecioglu. “Erdogan is displeased that Akinci acted independently. And Erdogan’s displeasure is behind today’s crises.”

Since a solution in Cyprus is not possible without Ankara’s contribution and consent, why didn’t he manage these sensitive relations better?

“Akinci puts a lot of faith in people he trusts,” stresses Kahvecioglu. “He trusted Anastasiades a lot. He first and foremost saw him as a friend, and then a political counterpart. He trusted that they could overcome any political differences through their friendship.”

Akinci’s absolute trust in Anastasiades could even be seen as political naivete.

“Akinci should have been conscious of the fact that there is a politician opposite him,” says peace activist Okan Dagli. “He should have foreseen that certain political calculations, interests, ambitions may alter Anastasiades’ priorities. For Akinci, federal solution was the absolute priority and he believed this was also the case for Anastasiades. His good faith and trust got ahead of political foresight.”

Although a series of disappointments throughout the process disheartened Akinci, he still believed that things could work out in Crans-Montana in July 2017 when all the international actors would come together, encourage the sides and help formulate mutually acceptable solutions to outstanding issues.

The failure was devastating for an overemotional Akinci, which manifested itself in his final statement at Crans-Montana: “This was the last effort by our generation. We failed.”

“He was without hope. He could not see the way ahead,” says Kahvecioglu to explain why Akinci made such a dramatic statement. “And later he probably regretted having ever said that.”

Akinci retreated into silence and withdrew from everyone, even his supporters for months after the failure in Crans-Montana.

According to Kahvecioglu, the reason for his resentment was not just the failure to reach a solution but also the loss of a friend: Anastasiades.

“If Mustafa Akinci is disappointed and hurt, it is because his personal relationship has also been destroyed,” says Kahvecioglu. “He cannot come to terms with the fact that personal friendships can be destroyed because of political reasons.”

But the lone fighter is not willing to give up easily. “Not because he is a romantic or a dreamer,” says Kahvecioglu. “But because he truly believes this is the best future for both communities in Cyprus. And he will stand up for this till the end.”

“At the moment, it is not Akinci personally, who is being disrespected and attacked by Ankara,” explains Dagli. “It is the Turkish Cypriot community, 60 per cent of which elected him for a five-year term for his vision of a united, federal Cyprus.”

With an Ankara that is clearly trying to steer the process away from a federation and an uninterested, even disruptive Greek Cypriot leader, he has to be ever more adamant and creative if he is to succeed, Dagli adds.