Turning enmity into an unmatched friendship: France and Germany

Today marks 56 years since the signing of the Élysée Treaty between France and Germany. The ambassadors of two countries talk to the Cyprus Mail about what it meant for Europe

“MY HEART is overflowing, and my soul is grateful,” said French President Charles de Gaulle in fluent German after he and German Chancellor Konrad Adenauer signed the Élysée Treaty exactly 56 years ago today. 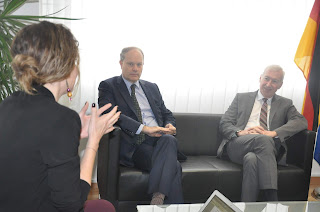 The revolutionary document of 22 January 1963 marked the beginning of peace and reconciliation between hereditary enemies France and Germany. It also changed the future of Europe, by laying the foundations of the European Union.

“We were able to overcome the pain of the past by looking at the future,” say René Troccaz, the Ambassador of France and Franz Josef Kremp, the Ambassador of the Federal Republic of Germany to Cyprus in a joint interview to mark the anniversary of the signing of the Élysée Treaty,

Almost every family both in France and Germany has lost at least one member to the centuries-old bloodshed between the two countries. How is it then, with so much pain and sorrow on both sides, that the two countries have been so successful in turning enmity into friendship and cooperation, and build a joint future?

Ambassadors Troccaz and Kremp explain that it was a process that required not only leadership but also a strong sense of ownership and involvement by the societies.

“The will of leaders was of course important,” says Ambassador Troccaz of France. “Complementary to that, both leaders were able to address their public. They explained saying ‘we need to jump this step and to reconcile. There is no way we can keep on the memories the remembrances of the war.’”

“It was a process that started with the Élysée Treaty but it’s a long lasting process over many decades that involves the whole society,” explains Ambassador Kremp. “The pain has to heal and you have to grow closer to each other. And the idea of the Élysée was to bring people together, to overcome stereotypes and prejudice and to see the real person on the other side.”

With the Élysée Treaty, France and Germany committed themselves to discussing all important policy matters, including those related to foreign affairs and defense, and pledged to “arriving insofar as possible at a similar position” on all the important economic, political and cultural issues.

There was a special focus on youth and education, as de Gaulle and Adenauer knew very well that it is not possible to change the future without changing the way the youth are brought up.

“It’s a question of in what spirit you educate young people,” remarks Ambassador Kremp. “It takes a different approach, a different spirit to create change. This is why there was a focus on youth.”

There was a need to create joint policies, practices and messages to the youth, Ambassador Troccaz adds. “France and Germany tried to address very concretely, how to encourage learning the language of the other country. They organized youth exchange programs, cultural encounters, school twinnings and joint university programmes. A Franco – German university was established. We have dozens of fields of cooperation addressing the youth. I will dare to say it’s a system. It’s an organized system.”

The Franco-German Youth Office was one of the first things that were established after the signing of the Élysée Treaty. To this day, it has enabled millions of young German and French to meet and take part in exchange programs.

Since the signing of the Élysée Treaty, tens of joint commissions of experts have looked at all the school material in an effort to find common ground on how to present the past, approach it in a way that is constructive for the future and to overcome the prejudices.

The world’s first joint history book co-written by French and German historians was published in both languages in 2006 and is used in high school history classes.

Cooperation between the two countries has not been limited to youth and education. It has developed into a natural thing that currently covers all segments of society and life. France and Germany have a common defence and security council, a financial and economic council, and councils devoted to culture and environment. There is a Franco-German Brigade, a joint army corps, joint sports clubs, exchange programs between French and German diplomats at both countries’ foreign ministries, a joint television channel – ARTE, and more than 2,000 twinnings between German and French towns and cities.

France and Germany have also changed the way they commemorate the past. Instead of focusing on who was victorious and who was defeated in past wars, they commemorate both the French and German victims through joint gestures and joint monuments.

On 11 November 2018, to mark the anniversary of the World War I Armistice for example, French President Emmanuel Macron and German Chancellor Angela Merkel jointly visited the site where Germany signed the armistice in 1918, and then Hitler, in an act of revenge, forced France to accept defeat in 1940. As the French and German national anthems played, the two leaders laid a wreath and unveiled a plaque celebrating the reconciliation between their countries.

“You realise there was so much pain and sorrow on both sides that there is no room for triumph, says Ambassador Kremp, whose grandfather fought the French in the First World War and father in the Second World War. “You commemorate the victims – and not only soldiers, also civilians – on all sides.”

All these efforts have contributed to overcoming the hostility and reversing the public opinion in both countries. Opinion polls demonstrate that the French and the Germans, who viewed each other as the ‘enemy’ until 1960s, now regard each other as each others’ number one ally. And the two countries that have turned enmity into an unmatched friendship, now feel the shared responsibility to strengthen the European Union.

“It’s the whole. It’s the education, it’s the perspective and it’s the fact that people realise that in the world we are living in today, our future is European and our partner is Germany,” says Ambassador Troccaz. “When it all started in the 1960s, the subject was reconciliation and peace. Now the subject is Europe. It’s not only that we are neighbours and good friends. It’s that we have a project. That we built something together.”

“Now our focus is Europe,” agrees German Ambassador Kremp. “It is to help form Europe into something that can play a role in world stage on equal footing with other world powers.”

Fifty-six years on since the signing of the Élysée Treaty, today, Macron and Merkel will be signing the Treaty of Aachen to renew their commitment to each other and to pool their strengths for a strong and sovereign Europe that will safeguard the future for millions of Europeans.

“No progress is complete,” underlines Ambassador Kremp. “With every achievement, you have to fight to preserve it for the next generations. Many things are taken for granted today. My niece and nephew cross the border between Germany and France without showing a passport. They cannot imagine that what they have can be threatened and questioned again. We have to make sure achievements we make are passed to the next generation.”

https://cyprus-mail.com/2019/01/22/interview-turning-enmity-into-an-unmatched-friendship/
Posted by Esra Aygin at 17:51