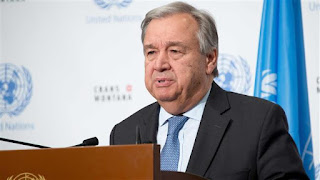 United Nations Secretary General Antonio Guterres presented a framework to the sides on 30 June 2017 during the Cyprus Conference in Crans Montana. This document adeptly provided a framework for the solution of the important outstanding issues of political equality, property, territory, security/guarantees, and equivalent treatment – the most sensitive and difficult issues, which were kept by the sides for the big give-and-take at the end of the process. Unfortunately however, since it was abandoned at the dinner table at Crans Montana, the Guterres framework has not been upheld by anyone, including its name-father.

Even though the Greek Cypriot side expresses acceptance of the Guterres framework, it voices demands that are simply inconsistent with the framework, such as: “Let’s first solve the internal issues among ourselves and then prepare the security conference together with the UN Security Council’s five permanent members.”

The Turkish Cypriot side, on the other hand, is not even mentioning the Guterres framework. Let embracing the framework alone, some Turkish Cypriot officials are coming up with dangerous suggestions like “redefining UN parameters.” But the most incomprehensible attitude must be that of the UN’s. The UN has not shown any will whatsoever to uphold the document that carries its own secretary general’s name.

The Guterres framework was prepared after UN Secretary General Antonio Guterres listened to all sides -including the guarantors- directly or through his special advisor and formed a thorough understanding of who may compromise how much on which issues, and which issues are red lines. Therefore, the framework eliminates positions that are unacceptable to either of the sides and only includes positions that are acceptable to all. In this sense, it is a compromise document. 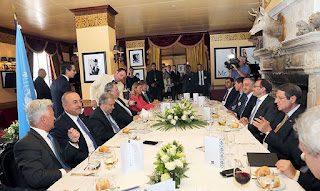 The Guterres framework envisages rotating presidency with a 2:1 ratio; effective participation, where one Turkish Cypriot positive vote is sought; deadlock resolving mechanisms in vital decisions; a property regime that gives priority to dispossessed owners in areas under territorial adjustment, and to current users in areas not under territorial adjustment; the return of “a location” interpreted as Morphou to the Greek Cypriot constituent state; the free movement of goods, services, capital as well as tourists, students and seasonal workers between Turkey and the new federal Cyprus; and equitable treatment to Greek and Turkish nationals with regards to permanent residence.

In terms of security and guarantees, it asserts that both communities should feel safe in a federal Cyprus, and that the security of one should not come at the detriment of the other. The framework outlines that a system in which the right of intervention remains would not be sustainable; and that the Treaty of Guarantees could be replaced by adequate implementation monitoring mechanisms, where Guarantor Powers could partly be involved. The framework states that issues related to troops (numbers, withdrawals if and when they will need to leave, timelines, etc.) will be agreed at the prime ministerial level of guarantor countries.

It is worth repeating that this framework is a compromise document prepared after in-depth discussions with all relevant sides!

Attempting to re-negotiate the Guterres framework, which is one of the most important documents arising from 50-years of Cyprus negotiations, would disturb the balance successfully established by the Secretary General between all the sides, reset more than two years of negotiations and cost us decades. Putting this document away would bring about the questioning of not only two years of negotiations, but also the 50-year-old solution parameters. And this would mostly hurt Turkish Cypriots, who are not part of international community and law. Upholding the Guterres framework is the obligation of the UN, which has been hosting the negotiations for 50 years.

I will dare say that the only safe harbour for Turkish Cypriots is the prospect of a federal solution based on political equality in line with UN parameters. Any other alternative would drag Turkish Cypriots into uncharted waters. Mr Akinci should, in no time, declare his full commitment to the Guterres framework, gain the support of the international community and convince Mr Anastasiades to sit on the table for negotiations within the framework. This is the historic duty of the Turkish Cypriot leader, who has displayed a great commitment to solve the Cyprus problem and single-handedly led the process up until Crans Montana!

Guterres framework as it was presented to the sides:

Political equality
Rotating Presidency with 2:1 ratio
Decision-making (effective participation): simple majority with one positive vote with deadlock resolving mechanism/ in cases where issues are of vital interest for the communities

Security and guarantees
SG outlined that he did not think that a system in which right of intervention would remain would be sustainable. He said that areas that are under the Treaty of Guarantees could be replaced by adequate implementation monitoring mechanisms, covering various aspects, to be mutually agreed. In some of these, Guarantor Powers could be involved.  A security system should ensure that both communities feel safe in a united Cyprus, while the security of one should not come at the detriment of the other.
The issue of troops is a different question relative to the Treaty of Guarantees, and to be handled in a different format. Issues related to troops (numbers, withdrawals if and when they will need to leave, timelines, etc.) to be agreed at the highest level when time is ripe.

Equivalent treatment
Free movement of goods (= customs union + a quota to be agreed for primary agricultural products), services and capital are ok.
Free movement of persons: the regime will permit tourists, students and seasonal workers. For those seeking permanent residence, equitable treatment will be granted to Greek and Turkish nationals in Cyprus.