My intervention at a panel hosted by the French Ambassador to Nicosia Mr. Rene Troccaz on the occasion of the International Women’s Day: 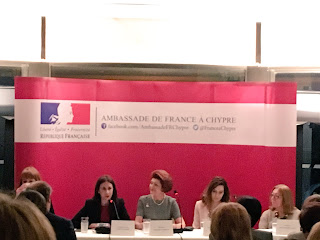 Before I start, I would like to take this opportunity to commemorate a young woman, a mother, a victim of the shameful sex trade on this island… Volha Viarbouskaya died 11 days ago at a nightclub in the northern part of Cyprus under suspicious circumstances. She was only 26. She was just one of the hundreds of women, who come to this country to earn a living and end up in the inhumane sex industry. I believe that this woman’s day should also mark the beginning of the much-needed acknowledgment of, and action on this common shame that we have.

I covered the Annan Plan process, I was in Burgenstock, I followed the Annan Plan referendum, I was there when Talat and Papadopoulos, Talat and Christofias, Eroglu and Christofias, Eroglu and Anastasiades, and Anastasiades and Akinci negotiated peace in MY country. I was there when Turkish Cypriot and Greek Cypriot men in dark suits - with their team of more men in dark suits – with the facilitation of more men in dark suits - tabled, discussed, negotiated, bargained, shattered and destroyed my future - over and over and over again…

If you ask me today, what – in my opinion - mainly characterized the negotiations of the past 18 years, I would tell you that it’s the men in suits.  And consequently: a burning urge to prove a point, to be proven right, to be justified, to be vindicated - rather than to resolve a problem.

And it’s not only these past 18 years - the Cyprus negotiations that date back to 1968, have always been monopolized by men. Despite strong evidence that women’s participation in peace processes increases the likelihood of peace agreements being reached, implemented and sustained, the Cyprus peace process has systematically excluded women. It has been carried out without the presence, representation and input of 50% of the society … It has been carried out without taking into consideration the concerns, fears, hopes, expectations, needs and priorities of 50 % of the society. We are talking about a Cyprus peace process that excludes 50% of the society in Cyprus…

While doing some reading for this evening, I came across some very interesting information:

Research has found there is a marked difference in how men and women define peace. Men prioritise negative peace, focusing on the absence of formal conflict and insecurity, and on the stability of formal structures. A peace process of men in dark suits would naturally be focused on troop numbers, timelines, composition of the governance structure, and which ethnic community will constitute what percentage of police.

Women on the other hand, value positive peace. They are more interested in peace on a local level, with emphasis on family and community needs. Evidence indicates that women participants in peace processes are usually focused less on the spoils of war and more on reconciliation, economic development, education and transitional justice – which are all critical for sustainable peace.

And by women’s participation, I don’t mean involving a couple of women in the negotiation teams as ‘token women.’ I mean presence of empowered women with decision-making powers, who can make a real influence in the negotiations.

When I question why - despite all the evidence - women are systematically left out of the negotiations process, I am told “women are not strong enough” “not resilient enough” “could break under criticism and pressure”, that “women can’t understand war and conflict” that “women don’t know diplomacy” or “god forbid they would make too many compromises” …

Let me tell you something:

Women are strong. No matter what the background, they probably have had to fight hundreds of wars every single day of their lives to get to where they are. Look at the woman sitting in front of you, next to you, behind you – she most probably has had to work at least twice as hard as you, to achieve the same recognition and be here.
Women don’t break under criticism. They’ve been criticized all their lives for being successful, for not being successful - being pretty, not pretty enough - being ambitious, being carefree – having a career, not having a career – for trying too hard, for not trying hard enough…
Because winning by a physical fight is usually not an option, women are experts in diplomacy from a very young age. They know compromise is part of life and they constantly meet their husbands, parents, children, colleagues, friends halfway.
Women find a way – they’ve done so, most of their lives on a daily basis to survive.
Women know violence – more women die from violence against women than all wars combined.
Women know war – they are the main victims of war along with children. And despite this, they are the ones keeping life going during wars. They know that no peace can be worse than war.

Before I end my words I would like to give you an update of the Cyprus peace process. I am hearing that the main obstacle in front of a meeting between Mr. Anastasiades and Mr. Akinci is the disagreement over who will pick up the phone first.