Complaints of mistreatment at the crossing points hamper relations

An increasing number of people have been complaining about mistreatment by Greek Cypriot officials at the crossing points throughout the island. Famous Turkish fashion designer Barbaros Sansal, who has been coming Cyprus through Larnaca for the last six years, was one of the most recent victims. 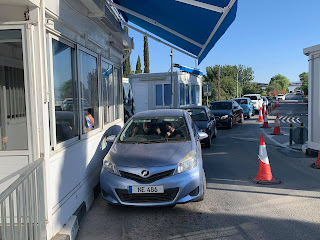 Sansal, who was trying to cross to the south with his car last Friday at the Agios Dometios crossing point in Nicosia, was told that his Turkish passport and internationally-recognised licence are illegal.

“The officer there threw my passport and my licence to my face,” says Sansal, who has a valid multi-entry visa to enter the Republic of Cyprus and who spends a lot of time in the southern part of the island.

“In the last couple of weeks, I have been receiving calls every single day from people, who complain about the way they were treated at the Deryneia crossing point,” says Okan Dagli, who is a peace activist with the Famagusta Initiative.  “This seems to be systematic… The Deryneia crossing point was supposed to be a hope, a symbol for the reunification of our island. It was expected to contribute to intercommunal rapprochement and peace. However, this mistreatment is harming our relations.”

Berna, who only wanted her first name to be used, had her and her daughter’s ID thrown on the floor at the Deryneia crossing point last Thursday as she tried to cross to the south because she “stopped in the wrong place.”

“I normally don’t use the Deryneia crossing point because I always hear negative things,” says Berna. “But on Thursday, we decided to use it with my daughter. As we were crossing to the south, I stopped in front of the police officer standing outside the kiosk collecting the IDs. I handed him the IDs and he handed them to the lady sitting in the kiosk. After registering us, she put her arm outside the kiosk and dropped our IDs on the floor. When I asked her why she did that, she said it was because I had ‘stopped in the wrong place.’ But I had stopped where the police officer was. As I tried to explain this to her, she started shouting at me in Greek.”

Berna had to collect her IDs from the floor and get back in her car, which made her feel terrible, she says.

In a practice that is unmatched at other crossing points, at the Deryneia crossing point, Turkish Cypriots returning to the northern part of Cyprus are made to park their car, get out and do the procedure to cross at the kiosk, which is reserved for those, who cross to the south. There, they are made to wait because the priority is given to the people crossing from the north to the south. This practice only applies to Turkish Cypriots. Greek Cypriots and other nationals are allowed to cross normally without parking and getting out of their cars as in other crossing points.

“This confuses people,” says Dagli. “They try to ask what they have to do and why, and they are usually met with anger, shouting or rudeness. “There have been people, who had their IDs thrown in their faces or others, who were denied permission to return to the north.”

According to Dagli, this practice is new and only started after the pandemic.

“One question is: Why is there a different practice in Deryneia? In other crossing points everyone is treated the same. Why are Turkish Cypriots treated differently in Deryneia? People question this.”

Serdar Atai, another peace activist from Famagusta has also been receiving a lot of calls from people, who complain about the treatment at the crossing point.

“Many people are concerned” says Atai. They are complaining about the new practice at the crossing point. Unfortunately, practices like this hamper our relations and discourage people from crossing.”

Another Turkish Cypriot woman, E., who did not want her name to be used, was arbitrarily prevented from returning to the northern part of the island at the Deryneia crossing point last Wednesday.

“We crossed to the south on Wednesday. On the way back, they make Turkish Cypriots get out of the car and do their procedure to cross at the kiosk reserved for crossings to the south. I find this very discriminatory. They only make Turkish Cypriots do this. It upsets me a lot, so I asked my husband to do the procedure. He took our IDs and got out of the car. Soon he returned saying that they wanted to see our marriage certificate. He took the certificate and went back to the kiosk. Then, he came back saying that they want to see me too. We have been crossing for years and this never happened before. We went there together and I questioned why they were asking us so many questions. The lady doing our procedure said I was being rude and told us we could not cross back to the north. When we tried to approach the other officer to do our procedure to cross, she got up and approached us while shouting that we should go to the Strovilia crossing point.”

E. and her husband had to drive to Strovilia, the other crossing point in Famagusta, to be able to cross back to the northern part of Cyprus.

“There definitely is something very wrong going on in Deryneia,” says E. “I will never use the Deryneia crossing point again. In fact, I don’t even know if I will ever cross to the south again.”

Dinçer Raif is another Turkish Cypriot, who has stopped using the Deryneia crossing point. “They treat us very badly” says Raif. “They are very angry and rude. I want peace and unification in my country but are they going to treat us like this?”

Dagli says that it is possible to see and document this treatment from the CCTV cameras at the crossing point. Asked whether they had been to the Republic of Cyprus police to complain, Dagli says: “The police is right there. There is a police officer in every kiosk. All this happens before the eyes of the police.”

However, Dagli reached out to Deryneia mayor Andros Karayiannis and sought his help about the issue.

“As someone who believes in peace and rapprochement, we expect you to take an initiative and to stop the separatists and ultra-nationalists of the Deryneia region from disrupting our relations” Dagli wrote to Karayiannis.

Dagli received a response from the Deryneia mayor that he spoke with the chief of police, who said he would make an effort to improve the situation.

“The chief of police did not deny this behavior,” says Dagli. “He merely said he would look into it.”

The Cyprus police could not be reached for comments.