Elections amid fears of an uncertain future

Turkish Cypriots vote this Sunday 7 January to elect representatives to the 50-seat assembly in the northern part of the island. One major element of the campaign has been the absence of any meaningful discussion on the Cyprus issue, which dominated the agenda of previous elections. Instead, all the political parties focused on ‘amending the system’ in the north.

The elections do not affect directly the position of the Turkish Cypriot leader Mustafa Akinci and the prospect to restart negotiations for a Cyprus settlement. Indirectly, though, a pro-solution administration would strengthen Akinci’s hand and put an end to decisions by the outgoing rightwing National Unity Party UBP-Democratic Party DP coalition that gave rise to tensions and mistrust across the divide. Such policies were the imposition of customs duties on humanitarian aid to Greek Cypriots and Maronites living in the north and the restrictions on religious services in the orthodox churches there. Another right-wing administration with vested interest in the continuation of the division would seriously complicate future solution attempts and encourage integration with Turkey. 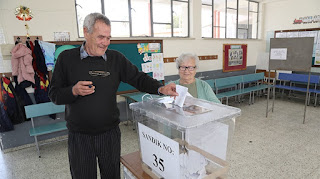 The economy and other internal issues have dominated the campaign leading to Sunday’s election. Other aspects linked to a Cyprus settlement were hardly discussed. Observers point out that the failed attempt to solve the political problem last July at the Swiss resort Crans Montana delivered a blow to people’s hopes for a solution. Also the lack of clear vision for a reunited island made the political parties avoid the issue.

“Even the Republican Turkish Party CTP, which, as a matter of principle, has always made the Cyprus problem a priority, has built is campaign on changing the current structure in the north,” said Mete Hatay, senior researcher of PRIO Cyprus.

Opinion polls show UBP and CTP leading the race, followed closely by former chief negotiator Kudret Ozersay’s People’s Party HP and left wing Social Democracy Party TDP. No one is expected to secure the absolute majority of more than 50 percent of the vote to form a single-party administration. As a result, a coalition is again the most likely outcome. Both CTP and HP have ruled out cooperating with UBP. They criticise the party of abusing power, mishandling public funds and serving Ankara’s agenda on northern Cyprus.

General elections were brought forward to 7 January as criticism and reaction against the ruling UBP- DP coalition mounted.

Mine Yucel, director of the Centre for Migration, Identity and Rights Studies (CMIRS), said people are angry at the political establishment. Their anger will be channeled in “cross-party voting”, whereby people will vote for candidates across party lines, instead of favouring candidates of one party, a dominant election behaviour in past polls.  Yucel expects the “cross-party voting to reach 20-30 per cent on election day, making it more difficult to predict the outcome.

The UBP-DP rule has been mired by corruption reports; granting arbitrary citizenships, public sector employment and land for political gains; also blindly complying with Ankara’s wishes.  Many political observers expect significant numbers of traditionally right-wing voters to switch, out of frustration, their allegiance to Ozersay’s HP, which is running for the first time. HP pioneered the “correcting the system” election agenda and is considered to have a broad supporter base although many of its candidates are right-wing. Ozersay run as an independent in the 2015 elections for the Turkish Cypriot leadership and had unexpectedly a strong showing, getting almost as much votes as the CTP’s candidate Sibel Siber. HP’s pledges of good governance, transparency, accountability, social justice and commitment to fight corruption appear to have gathered support among the electorate.

CTP is running under its new leader Tufan Erhurman. The party has not included legendary political leaders, such as Mehmet Ali Talat, Ferdi Sabit Soyer and Omer Kalyoncu, in its candidate list. The move has been broadly perceived as a positive effort towards self-criticism. The party’s election program focuses on economy and production. It also aims at appealing to a larger voter base by placing in its list candidates from professional unions and associations. Among these candidates is Fikri Toros, former president of the Turkish Cypriot Chamber of Commerce, who had played a key role in persuading Mustafa Akinci and Nicos Anastasiades to overcome the “ENOSIS” crisis back in February 2017.

The Social Democracy Party TDP, where Akinci comes from, has put together a fresh team of popular young professionals from different walks of life, and is considered to be the party with the strongest candidate list.

Opinion polls suggest that Serdar Denktas’ Democracy Party DP may not pass the election threshold, which is 5 per cent. In a bid to gather support, Denktas has come up with a very liberal election program that includes open discussion about liberalizing marijuana and allowing same-sex marriage. PRIO’s senior researcher Mete Hatay said it is unclear whether the traditionally conservative voters of DP would support such a liberal programme that has also raised doubts about its feasibility.

Another party running for the first time, is the far-right, Rebirth Party YDP, established by people of Turkish origin. Opinion polls suggest YDP will have a difficult time passing the threshold.

At a certain point in the campaign there was a growing temptation among the public to boycott the elections, as a protest to Ankara and its vast influence in the north. The tendency though, was not transformed to a proper movement and its appeal was restricted mainly to social media.  Yucel from CMIRS expects the turnout to be around 80 per cent, a good figure under the circumstances.

According to official numbers, 188,668 out of a total registered population of 230,747 Turkish Cypriot citizens will be eligible to vote - some 16,000 up from the latest general elections held in 2013. Almost half of these people were granted citizenship in recent years.