Bringing down walls – brick by brick

The banners extending Easter wishes to Orthodox Cypriots placed on both sides of the road leading to the Agios Dometios crossing point in the northern part of Nicosia meant so much for peace building on this island. 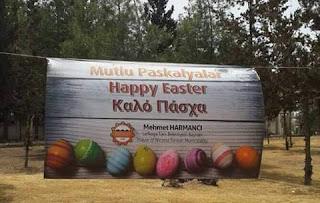 The reaction I got after posting a photo of one of the banners on social media was even more encouraging. So many likes, shares and appreciative comments. Such a welcoming sentiment both among Turkish Cypriots and Greek Cypriots. Not a single negative comment. Not a single criticism… People thanking Harmanci, and especially Greek Cypriots floating the idea that the Nicosia Mayor Constantinos Yiorkadjis should reciprocate with a similar message during bayram – the Muslim holidays… I am sure Harmanci made this gesture without expecting anything in return. Whether Yiorkadjis reciprocates this or not is not really important. The real gain is that people saw the good will, the warmth, the sincerity of this gesture. They appreciated. They felt good. They felt respected. They started thinking… And that is when real change begins.

If this gesture helped crack – not bring down, but even crack – a single wall in a single Greek Cypriot’s heart and mind, then we win. Cyprus wins.