Money for north’s Kulliye better spent on hospitals and schools 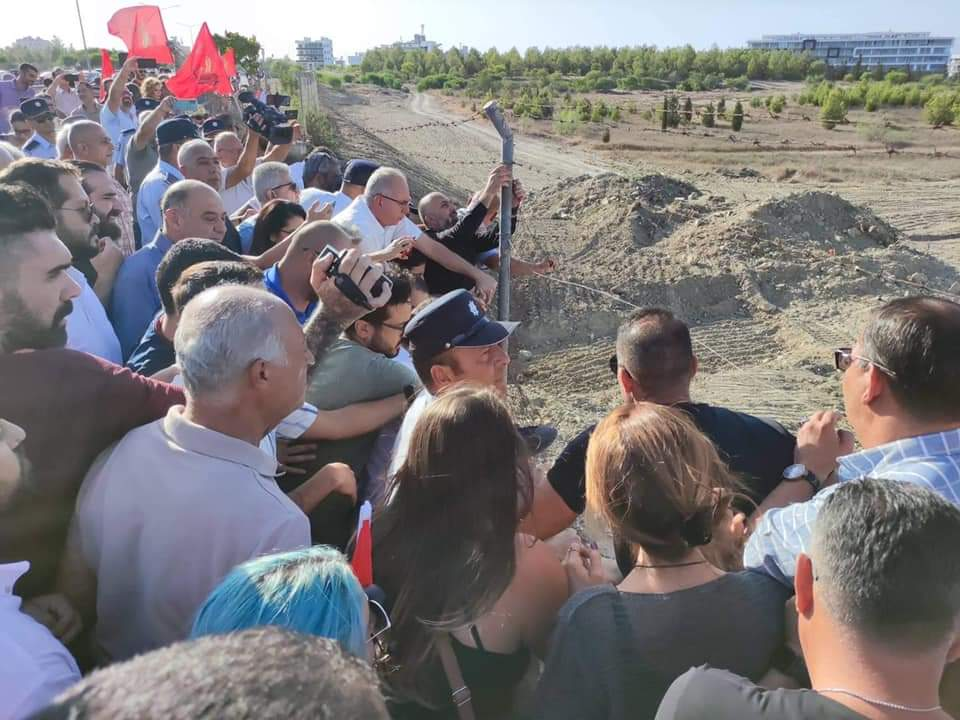 Turkish-funded Islamic ‘government’ complex is not part of Turkish Cypriot culture
By Esra Aygin
Turkish Cypriots were once again on the streets this week to protest an over-the-top and illegal project to construct a Külliye – an Islamic government complex – in the northern part of Cyprus.
The complex will include a “presidential palace” for the Turkish Cypriot leader, a “parliament building” for the Turkish Cypriot assembly, a mosque and a recreational park, and will cost around 2.5 billion Turkish lira (140 million euros). The project will be fully financed by Turkey.
Spending this kind of money for an Islamic complex in the middle of one of the worst financial crises facing Turkish Cypriots is seen as disrespectful and a waste by many. The Turkish Cypriot economy has been in free-fall in recent years, as the Turkish lira lost 44 per cent of its value in 2021 and shed a further 22 per cent this year. Its fall in value has led to soaring prices where the economy is dependent on imports. The annual inflation rate reached 118 per cent in August.
“188 schools and 13 hospitals could have been built, and 107 MRI machines could have been procured with this money,” was the headline of the daily Yenidüzen on Thursday. The newspaper drew attention to the poor condition of public schools and hospital and questioned how a Külliye could be the priority.
A Külliye, which is a complex of buildings associated with Ottoman architecture centred around a mosque, is not part of the Turkish Cypriot tradition or culture either.
Besides being costly and unfamiliar, the controversial construction on Greek Cypriot land in Ayios Dhometios is also illegal, since the project owners have not applied for any of the permissions required to get a building permit. Mayor Mehmet Harmancı of the Nicosia Turkish Municipality signalled the other day that the construction site may be sealed off for this reason. Harmancı stated that they have sent a written warning to the Turkish Cypriot leader Ersin Tatar’s office.
“Unless all the procedures are complied with, we will have to use all the legal rights given to us by law,” Harmancı said in a statement. Municipalities have the authority to seal off constructions that don’t have the necessary permissions. The construction on greek cypriot land in ayios dhometios is illegal
The construction on Greek Cypriot land in Ayios Dhometios is illegal
Some of the protesters who shouted “We don’t want a Külliye in Cyprus” went beyond the police belt and barbed wires to stop the bulldozers tearing down trees and preparing the land for the construction. Two protesters were later arrested and then released pending the outcome of a trial in which they will be charged with “resistance to police”. According to media reports, police are looking for many other protesters. A public meeting was called by opposition parties and civil society organizations on Thursday evening to discuss how Turkish Cypriots can stop the construction of the Külliye. The suggestions of the people, who attended will be evaluated and a road map will be drawn, the organisers said.
“Here we have a Külliye project, with no permission and no public conscience behind it…” journalist Sami Özuslu said during his morning programme on Kanal Sim earlier this week. “A Külliye that large segments of the society are not comfortable with… People think that this amount of money, regardless of where it is coming from, should not be wasted. They think that we already have a parliament building and a presidential building. But against what this community thinks, they are going on with the project.”
For many Turkish Cypriots, the Külliye also symbolises Turkey’s mounting control and intervention in the northern part of Cyprus.
“Külliye is actually the symbol of a much bigger project,” says journalist Cenk Mutluyakalı. “It is the symbol of the unnamed ‘annexation’ project. I hope we wake up in the face of the loss of our will, the destruction of our democracy, the attack against our values.”
This project was in fact heralded by Turkish President Recep Tayyip Erdoğan himself last July, during his visit on the island to mark the anniversary of the Turkish invasion. After announcing a few days earlier that he would soon have “good news” regarding the north and causing speculations ranging from Azerbaijan recognising the breakaway state to direct flights being launched, Erdoğan had declared that Turkey would be building a Külliye.
“I want to give you a piece of good news,” Erdoğan had declared. “The TRNC neither has a proper presidential palace, nor a parliament. The presidential building is a slum dating back to the British times. We will build a Külliye and a spectacular public garden. This is the manifestation of being a state… The president will have a Külliye from where he will show himself to the world in glory… When we bring this project to life, everyone will see what kind of a state the [TRNC] is.”
Turkish journalist Yalçın Doğan had mockingly written at the time that:
“Hereby a first is happening in history: Becoming a state by building a presidential building.”
In fact, shortly after Erdoğan’s announcement, the project started being carried out swiftly. First, hundreds donums of land in Ayios Dhometios, which was a designated military area, was demilitarised. The construction contract was awarded to Siyahkalem – a Turkish company known to have close relations with Erdoğan’s Justice and Development Party AKP – via a closed tender held in Turkey. The architect of the Külliye – Hilmi Güner – who is a Turkish national, was given Turkish Cypriot citizenship through a “Council of Ministers” decision.
Cafer Gürcafer, the head of the Cyprus Turkish Building Contractors Association, at the time had said that, as an association, they were against the “philosophy of the project.”
“We are going through difficult days economically and so we proposed using this money for other purposes,” said Gürcafer. “However, especially the Turkish Foreign Ministry was insistent and determined to build the Külliye as part of their wider foreign policy.”
The construction of this Külliye “clearly demonstrates that the intervention in the will of the Turkish Cypriot people is continuing”, said the opposition Republican Turkish Party CTP in a statement earlier this week. “The Turkish Cypriot people, who are being dragged into democratic and economic poverty, do not need a Külliye project.”
Lawyer, activist and columnist Aslı Murat agrees that the real aim behind the Külliye is to exert more power over Turkish Cypriots.
“For tyrants, who have drifted away from democracy, and who have erased rights and freedoms, symbols are important,” says Aslı Murat. “Symbols are designed as objects of power… The Külliye construction is one of these very important symbols. It is not a mere building, but the most concrete symbol of obedience to the master… The aim is not to strengthen the existence of Turkish Cypriots. The actual aim is to further entrench the colonial mentality in the northern part of Cyprus; to narrow our living spaces down and to say ‘I am the master of this land.’… The Külliye is not just a Külliye.”
https://cyprus-mail.com/2022/10/02/money-for-norths-kulliye-better-spent-on-hospitals-and-schools/
Posted by Esra Aygin at 17:41