Turkish Cypriots are going to the polls on Sunday to elect a leader amid serious accusations of intervention in the elections by Ankara, a charade of opening the fenced-off city of Varosha and a collapsed coalition. 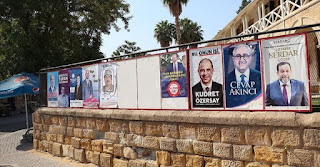 “No matter what kind of intervention or steering is done, Turkish Cypriot people will act with their own mind and conscience, and exercise their free will at the polls,” said Akinci during a TV programme earlier this week. “On 11 October the people will make a decision and not others.”

The allegations of election meddling by Ankara began with reports of Turkish officials visiting villages and telling voters not to vote for Akinci. The Turkish Cypriot leader and Ankara have been at odds mainly over the solution of the Cyprus problem.

“The latest developments have showed once again how problematic our current relationship with Turkey is. Some think they are entitled to intervene in the Turkish Cypriot democracy and elections. They are saying ‘I can elect your president… The Turkish embassy is calling clubs, associations and asking for a list of their needs,” continued Akinci. “Some deputies from Turkey are visiting villages and telling people not to vote for me… This behaviour is opening deep wounds in the conscience of Turkish Cypriot people.”

On Tuesday, in a move seen widely as an attempt to favour one candidate against Akinci, Turkish President Recep Tayyip Erdogan and National Unity Party candidate Ersin Tatar – who was the head of the Turkish Cypriot ruling coalition at the time - announced the partial opening of the fenced off city of Varosha. The joint press conference was carried live by the Turkish Cypriot state TV with the subtitle: “Fenced-off city of Varosha is opening.”

The announcement, which came during a ceremony initially planned to mark the completion of the repair works on the water pipeline that carries water from Turkey to Cyprus, was widely condemned by the other candidates as well as the United Nations Security Council.

“This is a disgrace for our democracy” Akinci stated. “This organization…aimed at providing an advantage to one of the candidates constitutes another dimension of the intervention in our elections… I am sure the Turkish Cypriot people will give an answer to this with their free will.”

“The unilateral decision to allow civilian access to some parts of the fenced city Varosha is not only a violation of the UN Security Council resolutions which suggested transferring the area under the UN control but also Turkey's attempt to interfere in the Turkish Cypriot elections that will take place this weekend,” said the multi-communal peace movement UniteCyprusNow in a written statement. “From what we understand from yesterday's developments, the decision for partial opening aimed to bypass the elected leader of the Turkish Cypriots and to take a position in favour of UBP candidate Ersin Tatar.”

On Thursday, a beachfront and the Demokratia and Kennedy avenues within the fenced-off city were opened to visitors only between certain hours. Around 2,000 people were allowed to enter the abandoned town and use the beach. Access to most of Varosha still remains off limits and naming this move as ‘opening Varohsa’ is largely deceptive. Varosha is a town in the northern part of Cyprus which has been fenced off as a forbidden military zone since 1974, when its Greek Cypriot population fled from the advancing Turkish army. It is among the places to be returned to its lawful former Greek Cypriot inhabitants under the control of the future Greek Cypriot constituent state within the framework of a comprehensive federal solution on the island. Recently however, Turkey has been vocal about plans to open Varosha under Turkish Cypriot control despite United Nations Security Council resolutions prohibiting the move.[1] 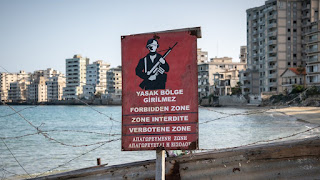 The decision to partially open Varosha, led the junior partner People’s Party HP of Kudret Ozersay to withdraw from the coalition arguing that Tatar was exploiting Varosha for election gains. Ozersay, who has been calling for Varosha to open under Turkish Cypriot administration, said he was not informed about the move and did not agree with the way the partial opening took place.

The UN Security Council early on Saturday called for a reversal of the decision to open the coastline in the fenced-off area of Varosha in Famagusta and to adhere to UN resolutions.

The Council expressed concern over Turkey’s actions and called on the parties to avoid any unilateral action that could raise tensions on the island.

The disagreement between the Turkish Cypriot leader and Ankara over the nature of a solution deteriorated further earlier this year when Akıncı, in response to a question by the British newspaper The Guardian on the possibility of Turkey’s annexation of the North, said: “It’s a horrible scenario.” The Turkish Cypriot leader was relentlessly criticised and, some would say threatened, by Turkish officials.

Turkish President Recep Tayyip Erdoğan described Akıncı’s comments as “very unfortunate,” while Çavuşoğlu said Akıncı is “unreliable” and accused him of “supporting terrorism.” Turkish Vice President Fuat Oktay said Akıncı’s attitude would “not be tolerated,” while Erdoğan’s chief advisor Yiğit Bulut wrote they would “fight with the last drop” of their blood against a fait accompli in Cyprus. Among other statements, were calls “to go to Cyprus and work so that he doesn’t win” and “blow him up like one of the PKK leaders.” AKP senior official Metin Yavuz said Akıncı “needs to be a man before he can be a leader.” Yavuz added, “If it weren’t for us, you couldn’t have even become a trashman, let alone becoming a president.”

It has been revealed that in an effort to remove Akıncı, Ankara in early August, invited Turkish Cypriot right-wing party leaders to encourage them to agree on a joint candidate to compete against the Turkish Cypriot leader. However, there was been no agreement. It has also been revealed that the Turkish ambassador in the northern part of Cyprus invited a number of deputies to his residence to garner support for Tatar. Photographs published in the media have also shown that Tatar met with the media advisor of Turkish Vice President Fuat Oktay, who is allegedly working for Tatar in his election campaign. Tatar also paid two unexpected visits to Ankara in the week leading to the elections where he was promised cash injections to the Turkish Cypriot economy. There have also been reports of a spate of phone calls and visits to leaders of local communities in the north offering help with solving localised problems in exchange for votes supporting Tatar.

“In none of the elections until now have there been so much intervention,” Akinci said during a TV programme last week… Certain officials saying they are acting on behalf of Turkey are doing everything they can to have a certain candidate elected and to have the current president lose the elections. They are doing this openly. Without feeling the need to hide it… The Turkish embassy has turned into an elections headquarter… The embassy is doing nothing else but working for the elections.”

I am disappointed that not all candidates are able to say that “this is an intervention and we don’t want this to happen,” said another candidate Serdar Denktash. “We want to freely exercise our democratic rights. But we are witnessing that there are unbelievable interventions in these elections.”

In the face of accusations of election meddling the Turkish embassy in the northern part of Cyprus made a statement denying the allegations and saying that opposing Turkey has been adopted as an election strategy by some candidates. The statement said it is unacceptable that Turkey is being used as an election tool.”

A total of 11 candidates are running in the elections.