I Skipped Work Today - Crossing to the other side 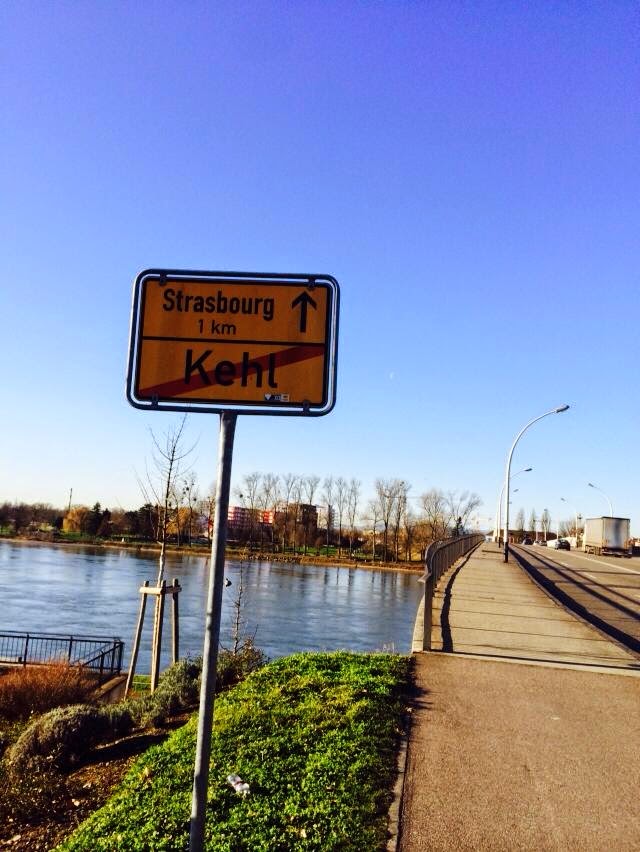 Right now, I should be sitting at the birds-eye balcony allocated to media at the European Parliament, listening to the debate on genetically modified organisms (GMOs). However, since I set foot on Strasbourg to follow the plenary sessions of the Parliament, I have been having this burning urge to sneak out and cross the ‘border’ – or rather the non-existing border – between France and Germany and to speak to the people living in the area.

I have tens of questions that I would like to ask the people, who live together on the French-German border which, for centuries, was stage to terrible wars that took the lives of millions. What do they feel? How do they live together after countless wars, pain and destruction? Did they really manage to form a common life? Can hatred, distrust and enmity become something of the past? These questions roam in my head as I travel towards the ‘Pont de l’Europe Bridge’ in a taxi.

Suddenly, I am startled with the deep voice of the taxi driver:
“Voila madame, Le Pont de l’Europe!”

Before my eyes lays solely the River Rhine in the name of a ‘border.’ On the bridge over it, there are people riding their bicycles, walking their dogs, and lazily swinging their fishing rods in the river. As a traumatized Cypriot, who cannot travel across a tiny island without filling papers, showing identity cards and going through controls, my eyes impulsively search for a barrier, a wall, some sort of a barbed wire, a uniformed official, a police booth, or at least a ‘line’ on the ground - even if symbolic. I realize that I automatically reach inside my bag ready to ‘draw’ my ID any moment as I cross the bridge. I laugh at myself.

As I freely cross the bridge between France and Germany - the opposing sides of the Second World War, which was stage to unbelievable massacres only 70 years ago, I see the sign ‘Bundesrepublic Deutschland’ and understand that I am now in Germany. It’s a beautiful day. I decide to enter the park stretching along the River Rhine right at the entrance of the town Kehl.

I first come across Yannick, a young 23-year-old teacher. His class of 3-4 year-old nursery students is with him. Under my scrunity, he talks to the children he has taken for a walk in the park both in German and French. He tells me that an increasing number of kids are learning both languages in the nursery, primary and elementary schools. Starting from secondary school both German and French are compulsory.

“The war was a stupid thing… We now live together. I am German but I don’t feel any different from someone who is French” he says. “Don’t you have any disagreements or problems at all?” I insist. “There is no difference between us. We are the same,” he says. His great-grandfather had fought against the French during the Second World War. “How do you think he would feel if he saw you living like this now?” I ask. “I am sure he would be very happy” he answers. 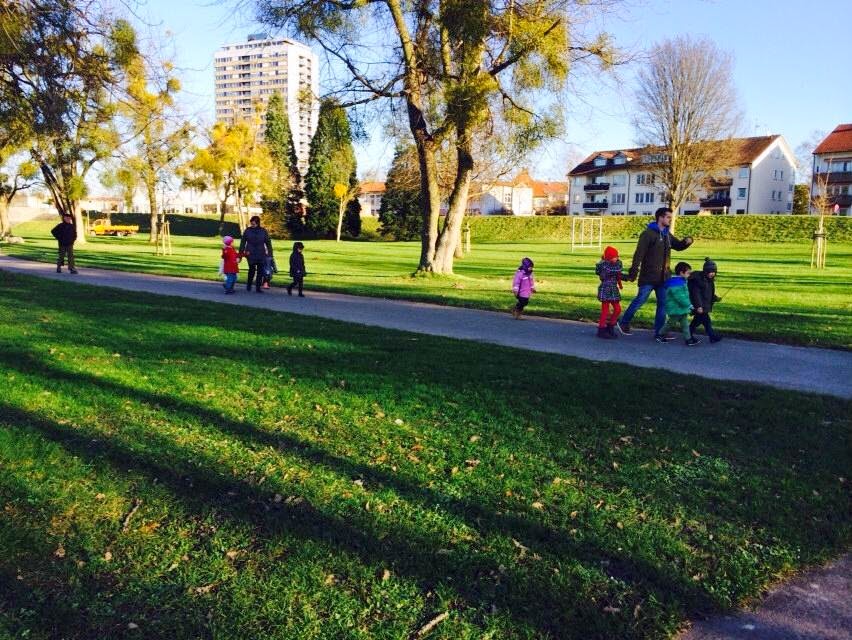 I leave Yannick with the kids, who are starting to get really bored, and continue to walk. My next target is Niklas, who is walking his dog. “Do you live here?” I ask him. “That’s a a difficult question,” he says. “Actually I live both in France and in Germany.” He must have understood my confusion, so he rushes to explain: “My girlfriend is here in Germany, and I work in France. Therefore, I sometimes live here, and sometimes there…” I ask him how it feels to be able to go back an forth like this between two countries with a history full of wars: “It’s wonderful to be free,” he says.

I approach another person who is taking a walk. Yann is a French taxi driver. He says he crosses to Germany every morning to walk in the woods. As I bombard him with questions impatiently, he calmly smiles at me and says, “The war was a long time ago. Is it so surprising that we have no discrimination amongst us anymore and that we live in peace?” Yes, unfortunately for me, it is suprising. I feel embarassed.

I get out of the park and walk towards the town centre of Kehl. A small market has been set up in the church square. I watch the salesmen and the people shopping. I hear them speak both in French and in German. At times, the conversations start in French and end in German. I approach a woman, whom, I gather must be French. I ask her why she is shopping here. “Because things are much cheaper here than in Strasbourg,” she replies. According to Ingrid, many people, who live in Strasbourg, do their food shopping in Kehl, which is cheaper. “But don’t French authorities react against this? You are contributing to the German economy instead of the French economy?” I hear myself asking. I understand from the way she looks at me that this question does not mean anything to Ingrid. It isn’t even comprehensible. She works at a French elementary school in Strasbourg. She explains to me that French kids take some of their classes at a school in Germany within the framework of exchange programs, and that some German kids come to her school for certain classes. I ask her what she thinks about the past. “The French and the German have realized that war brought them nothing,” she says. “If you want to live, you need to stop living in the past.”

From the people I speak with, I find out that around 60 thousand cars commute between Strasbourg and Kehl daily. A lot of French prefer to live in Kehl and work in Strasbourg since the property prices in Kehl are lower. They particularly shop for food, clothes, alchohol and cigarettes in Kehl, and buy luxurious goods in Strasbourg. They prefer Kehl for a quiet day in a small town, for taking walks and spending time in the park, and go to Strasbourg for a city life, cultural activities and entertainment. The majority speaks both languages with ease. The number of mixed schools are increasing each day. Especially the youngsters don’t see any difference between themselves and ‘the other.’

Just as I begin to think that such lack of ‘national consciousness’ is getting a little bit too much for my Middle Eastern mind, Ingo Wilmer comes to my rescue. He is a 53-year-old musician, who says that living on the French-German ‘border’ is sometimes “difficult” for him. “The youngsters speak both German and French. They live and work on whichever side they want. It is no longer possible to recognize who is French and who is German here. They have no national identity whatsoever,” he says. I see the annoyance in his face and hear it in his voice… He tells me that his father fought against the French during the Second World War. But immediately after, he adds: “What can we do, at least there is peace and quiet.”
As I walk back towards the bridge to return to Strasbourg, I feel a bit stupidified by this experience which has affected me more than I could have imagined... On the way to the bridge, I come across two singers on the street. The song they are playing is very familiar. My eyes fill with tears: 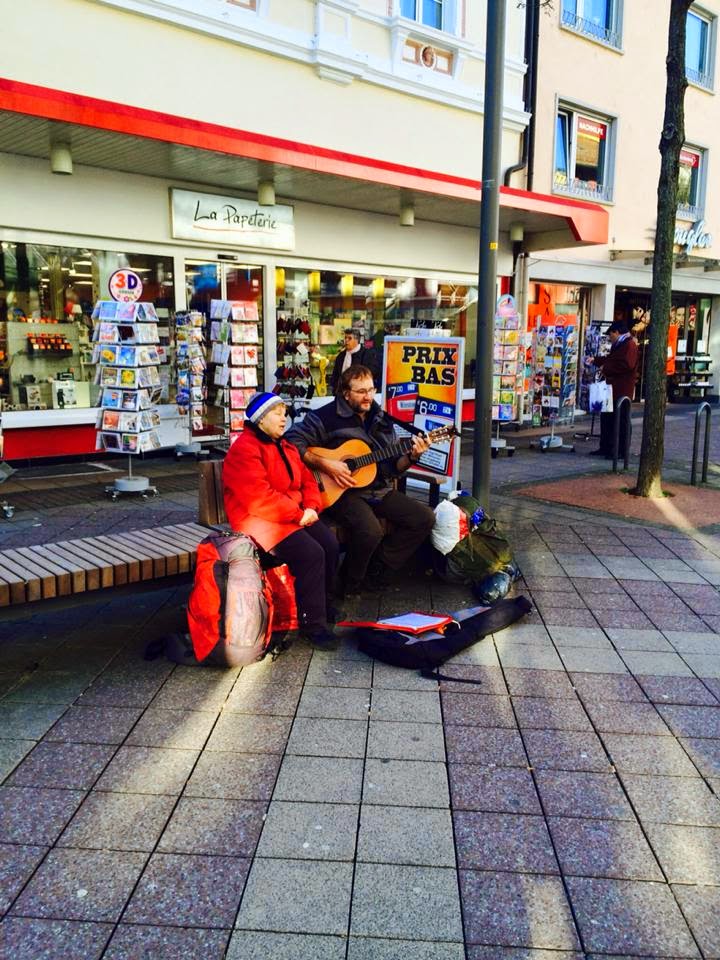 Imagine there’s no countries.
It isn’t hard to do
Nothing to kill or die for
And no religion too
Imagine all the people
Living life in peace...